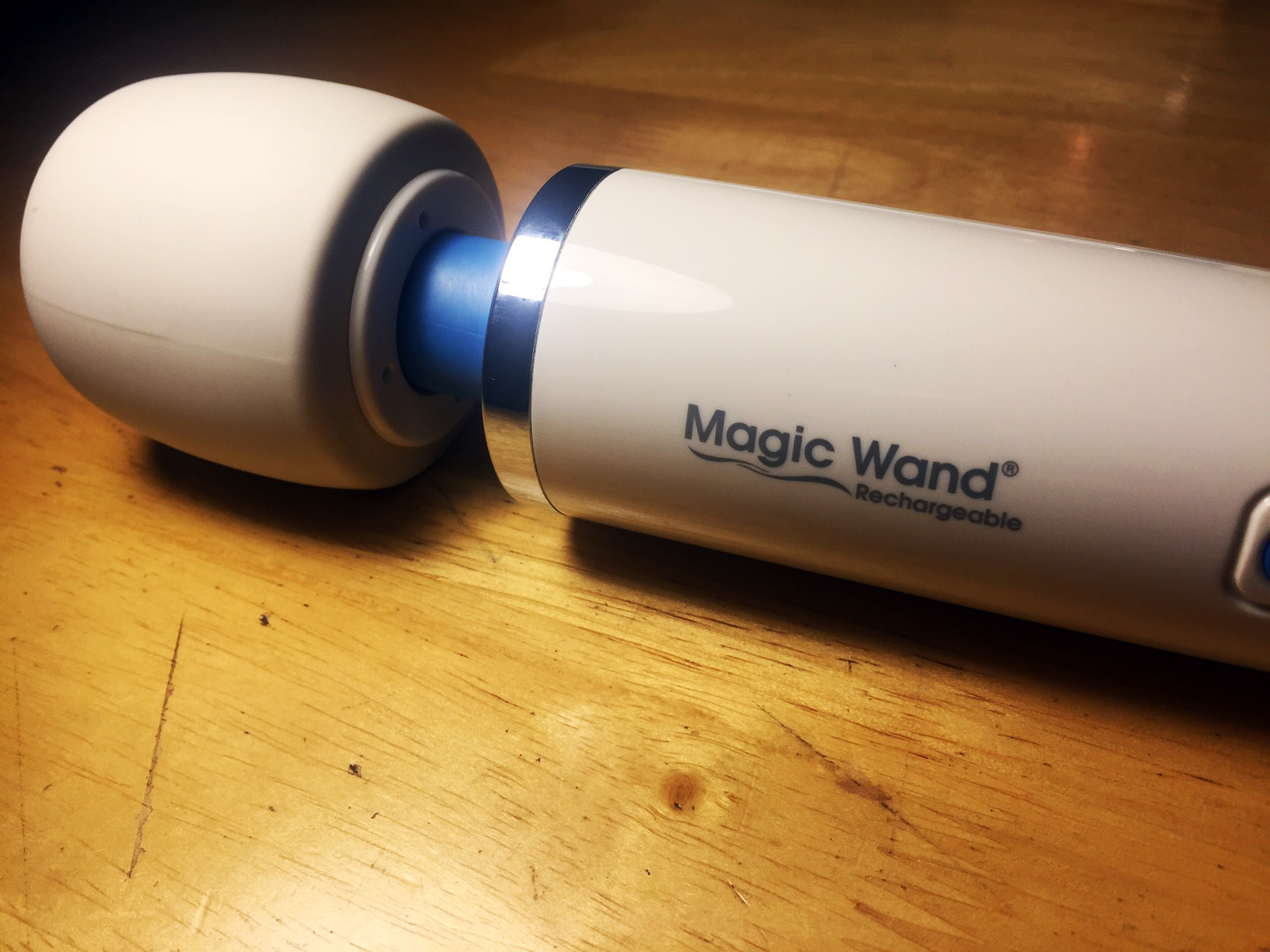 The Rechargeable magic wand shares a lot details with it corded cousin, in this review I will mainly focus on the differences, if you want to read more about the Original Magic wand you can check out our review of it Here. The rocker style switch has been replaced and makes way for a few simple buttons, the first turns the wand on and off. And the other two cycle between either patterns or vibration intensity with 4 options for each. It may be the slightly thicker silicone head on the wand, but the rechargeable version is slightly quieter than the corded version, but I wouldn’t call it a quiet toy especially on the higher settings.

The 4 speeds are comparable to the Original Magic Wand, judging by feel I would say level 2 is equivalent to the low setting on our corded version and 4 is right around the high setting. There are now 4 pattern options as well, we have never been a fan of vibration patterns so they have not been given much use. One caveat of the pattern controls is the inability to control the power setting of the pattern, they are preset at what seems to around level 3 or 4.  According the manual on 3-hour charge you should get approximately 3 hours of use, it does have an auto shut off after running for 20 minutes to prevent overheating and ruining the motor. This does not hinder your ability to turn it right back on at your own risk.

If we had to sit down right now and decide one toy to keep this would be the one. We originally purchased the wand roughly two years ago, when we won fifty dollars on scratch off on a road trip. Since then we have used The Original Magic Wand nearly every time we have sex, its ability to produce nonstop orgasms for us makes it our go to toy.
Flash forward to receiving the Rechargeable Wand, and our corded version has yet to leave the drawer. Everything the Original Wand does the new Rechargeable does better, besides a dead battery I don’t foresee a scenario in which we would use the Original over the Rechargeable from here on out. The addition of 2 more speeds makes easing up to the highest speed a nice steady climb, rather than a shocking assault.
In our previous review of the Original Magic Wand we stated what we would want to change.

That is not to say there isn’t room for improvement. The cord can get in the way sometimes. At six feet long it does not give us full range all over the bed, but this can be remedied with an extension cord. Harper wishes there was more than two speeds, something other than fast and oh my god! Lastly the toy would be much better with the inclusion of a silicone head rather than PVC.

With all the improvements over the Original wand, everything we wish they added has been added, and the improvements really round out the Rechargeable Magic Wand. That being said our favorite way to use together  is still the same cowgirl position. With Harper on top she is able to ride freely, while I press the head of the wand firmly on her clitoris. This usually doesn’t last long before she starts to become overwhelmed, once past that stage it is not stop climaxes until the end of our play time.