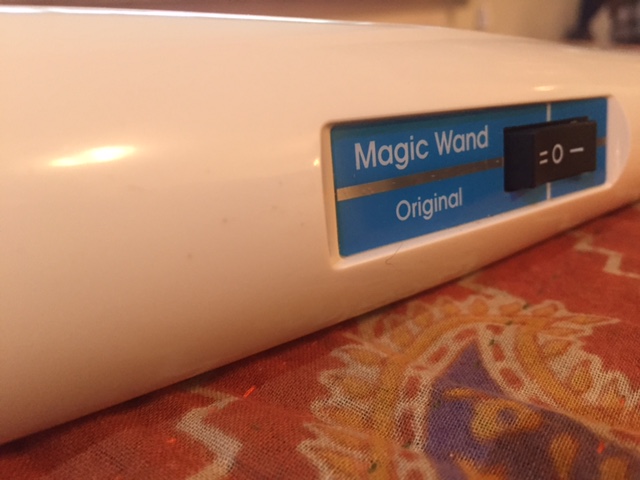 The holy grail of sex toys. You would be hard pressed to scan the web and not come across a gleaming reviews of The Original Magic Wand. Our experience with the toy has been nonstop exciting, and has really changed the way we go about go about sex.

If we had to sit down right now and decide one toy to keep this would be the one. We originally purchased the wand roughly two years ago, when we won fifty dollars on scratch off on a road trip. It arrived at our destination shortly following our arrival. Eager to open the package and catch a glimpse of one of the most famous sex toys on the web.

Our favorite use together has been in the cowgirl position. With Harper on top she is able to ride freely, while I press the head of the wand firmly on her clitoris. This usually doesn’t last long before she starts to become overwhelmed, once past that stage it is not stop climaxes until the end of our play time.

That is not to say there isn’t room for improvement. The cord can get in the way sometimes. At six feet long it does not give us full range all over the bed, but this can be remedied with an extension cord. Harper wishes there was more than two speeds, something other than fast and oh my god! Lastly the toy would be much better with the inclusion of a silicone head rather than PVC. Now these are our issues with the wand that we have, since our purchase vibratex has released a rechargeable model that remedies all of our gripes with the current model, but at nearly twice the price. So until then we will work with what we have and love every minute.

After owning the toy for a little over a month our Magic Wand did stop working, after contacting Vibratex they had a new unit shipped out the next and we were back in action in no time. It was a great experience with a customer service department that stands behind they product they distribute.

To end our experiences with the wand. If you have a clitoris or your partner has a clitoris it deserves to the wonders of The Magic Wand.

The head of the Magic Wand is made of PVC. Not the best material out there but there are many silicon caps and attachments that can be affixed over the head. If this is a deal breaker the new Rechargeable Magic Wand offers a silicone head as well as more speed options.

The Wand can be purchased through the following retailers: