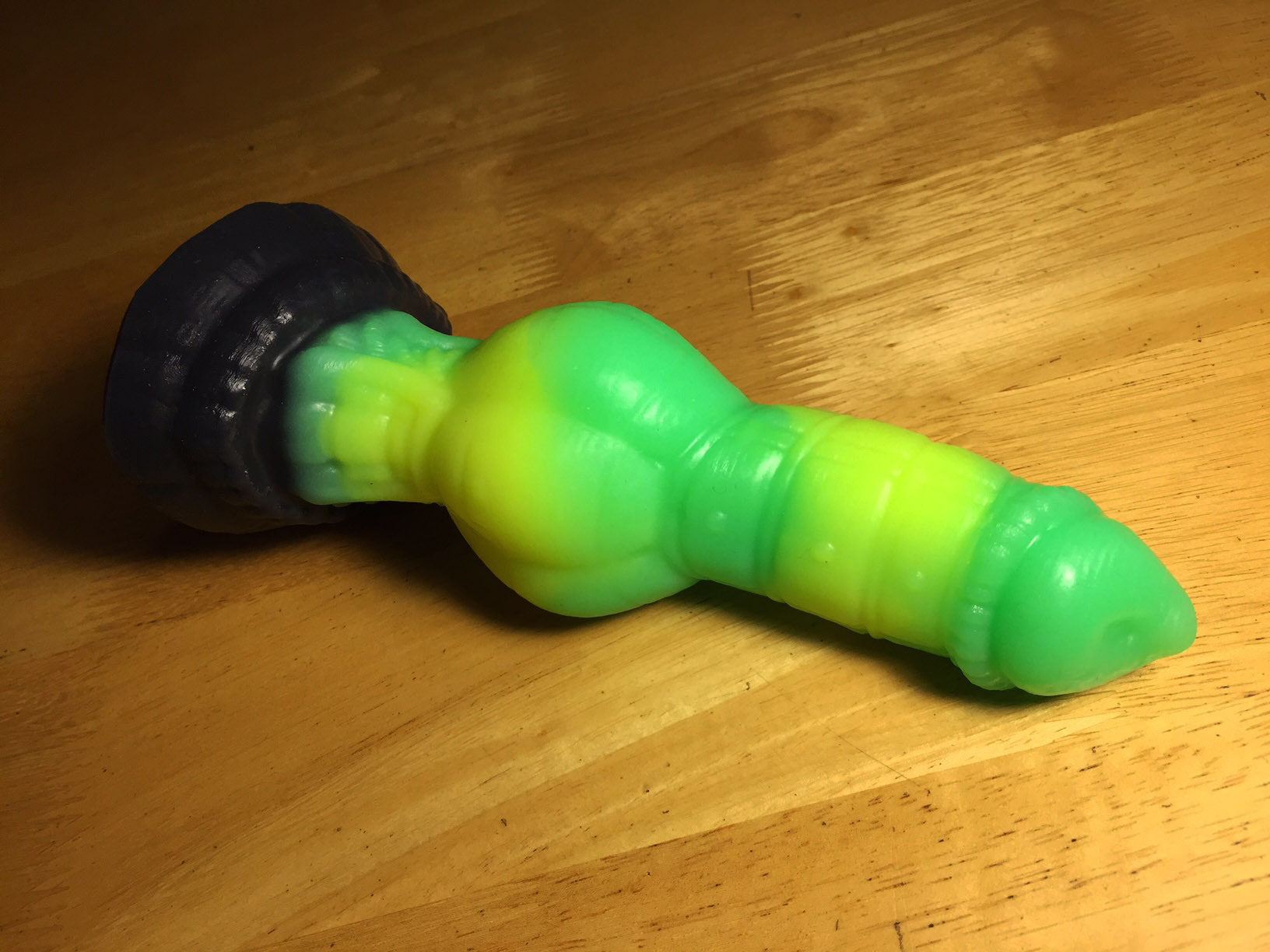 Frisky-Beast.com opened for business in the summer of 2013 in central Ohio. The company was founded by Theropod and Felicity Feather, who wanted to see more variety in the selection of ‘alternative lifestyle’ adult toys available to the public. Frisky Beast Enterprises is the result of their efforts, and they continue to strive for expansion and improvement on a day to day basis.

From our experience they offer very budget friendly fully customizable toys in over 25 Original designs. Each toy comes in a variety of sizes and firmness levels, so there is an option for any need. One of our favorite aspects of fantasy toys is the ability to truly customize the toy to your exact desires.

Although they currently do not offer color fades, they do offer a selection of unique, shop-created color schemes that include Ursa Major, Cosmic Tiger, Citrus Sunrise, etc. Outside of the premade color schemes you can choose from Marble (layering of two colors in a dynamic pattern on the toy), highlights (a secondary color layer that brings out the detail of a model), Overload (drippy ‘just finished’ effect layered onto the toy). They also offer split, which is a clean divide between shaft and base. Besides color customization Frisky Beast also offers mix-ins which are special effects that can be added to the pigment used in your toy. Mix-ins include things like glitter, metallic powder, glow in the dark, and Heatwave (a heat reactive color changing pigment).

One of the main issues when given so many options is narrowing down what you would like. I am the type of person to research even the simplest of purchases, reading reviews and descriptions until figuring out the perfect fit. With near infinite choices of color and design It can really create hold up. Analyzing the pros and cons of each design, size, texture, and firmness leads to a long period of contemplation.

When we ordered the Electrofox we asked for the following customization options:

“Small Electrofox. If possible we would like a black base with the most neon/highlighter yellow and green marbled together. If possible we would like the shaft to glow in the dark. Medium Firmness.” When we first opened the box out first thought was how close it was to how we imagined it would, which is always plus. One unfortunate aspect is the toy does not glow. I am unsure if that was a manufacturing mistake or a feature that was not available to me as a reviewer.

At 2.3” the knot is right at the limit of what I have taken comfortably from other toys such as the Tantus General or the Spark Plug. After 4-5 attempts I have yet to conquer the knot, and for a few different reasons than size alone.  The medium firmness is very soft, softer than I imagined it would be, this makes insertion difficult as the toy tends to fold or bend when it meets pressure. So once reaching the knot the toy tends to bend under the force needed to insert past the knot. Certain positions are better than others for trying to get the knot in, but despite heavy use, I have still yet to conquer. I will certainly update this post with my initials impressions once the knot is finally tackled.

I am sure with more attempts and practice it will happen, and even without the experience of that particular portion of the Electrofox it is a wonderful toy. Having so many options of toys to use leads to stiff competition, some toys never leave the drawer and others find themselves being used almost daily. Originally the ElectroFox was not my favorite. The short shaft, combined with the massive knot was not a combination that really worked for me. But after using it more and more, I can say I am a huge fan. I have come to love the challenge of almost getting past the knot, and the further I get the better the ElectroFox feels. It offers a great stretching feeling, but the unlike using just a wide toy, I can take the ElectroFox much deeper due to the narrower shaft. The combination of deep internal stimulation along with stretch from the knot is heavenly. And unlike with thrusting it is a sensation that is easier to accomplish when using alone, making it wonderful for solo play.

All in all, I am huge fan of the ElectroFox, and a huge fan of Frisky Beast. Despite the slow start and the learning curve of using a knotted toy, my experience has been beyond wonderful and the quality of the toy speaks for itself. Having worked with other Fantasy toy makers in the past, and  I would say Frisky Beast has some of the best custom fantasy toys for the price.